The Death of George V 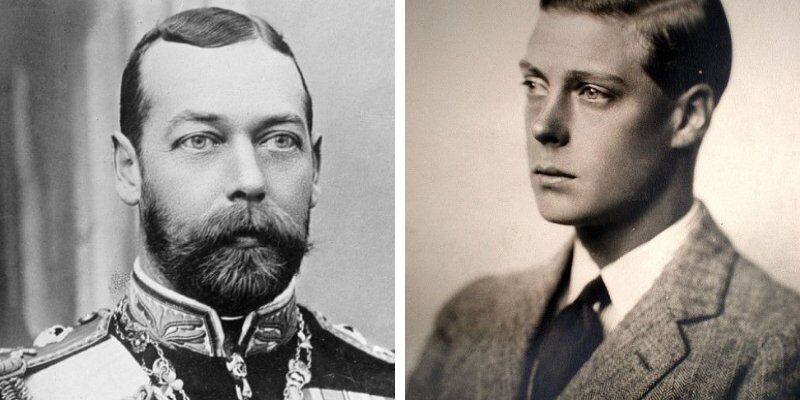 The death of George V occurred on 20th January 1936. He had reigned as King from 6th May 1910, and had been born during the reign of his Grandmother Queen Victoria. This short article looks at key points of his reign. Plus, we look at the succession of his son Edward.

George was born on 3rd June 1865 in London, and he was the son of of the Prince of Wales. His full name was George Frederick Ernest Albert of the House of Saxe-Coburg-Gotha. In his early years, he was educated alongside his older brother, Albert, by tutors and nannies. At age 12, George and Albert enrolled in the naval training academy.

When George was 18, he joined the Royal Navy, as he was not the first in line to the throne. He wasn’t expected to take the throne and this meant that a military career was permitted . Subsequently the sudden and unexpected death of his elder brother of influenza meant that he became heir to the throne. This is known as being ‘heir-apparent’, which is Prince Charles’ position in the modern British monarchy. Therefore, George had to give up a career he loved. He became known by the title ‘Duke of York’. He married his elder brother’s fiancée, Princess Mary of Teck and he became King in May 1910 on the death of his father.

Public respect for the king increased during World War One. This is because he made many visits to the front line, hospitals, factories and dockyards. George V took great effort to personally support the troops. On one such visit, his horse rolled over him. This resulted in him fracturing his pelvis and gave him pain for the rest of his life.

In 1917 anti-German feeling led him to adopt the family name of Windsor. This replaced the Germanic Saxe-Coburg-Gotha. The post-war toppling of many European monarchies meant that King George’s relationship with the Empire also changed.

In 1935, the King celebrated his Silver Jubilee, which was an occasion of great public rejoicing. There was a packed programme of events, commencing with a service of thanksgiving at St Paul’s Cathedral. It was declared a public holiday and parties were held all over London. This was helped by the fact that the city was bathed in glorious sunshine! Pageants, sports events and fetes also took place across the country. The King and other members of the Royal family appeared on the balcony of Buckingham Palace,. This is a proud tradition that continues to this day. Heads of state from across the globe congratulated the King on reaching such an important milestone in his reign.

The death of George V

In his later years King George suffered with respiratory problems and was administered oxygen for his condition. The death of George V occurred on 20th January 1936, following five days where he slipped in and out of consciousness.  He was succeeded by his son Edward.

The Accession of Edward VIII

King George was succeeded by his eldest son, Edward Albert Christian George Andrew Patrick David. Edward VIII  had served in the British army during World War One and undertook several overseas tours on behalf of his father. But he caused concern among politicians because he showed impatience with court protocol. Plus, he showed an apparent disregard for established constitutional conventions. Just months into his reign, he caused further controversy by proposing to an American divorcee, Wallis Simpson. At the time she was seeking her second divorce. Politically and socially this was awkward and it also conflicted with the Church of England’s position on marriage. This was before the coronation of Edward VIII had even taken place,

When it became apparent that Edward could not reign as King and also marry Wallis, he abdicated and was succeeded by his younger brother George VI. He was the current Queen Elizabeth’s father.

We have many articles in our archives about historical events in history, which we hope you enjoy. Plus, you might also be interested to read the following blog articles relating to the Royal Family. Prince Harry’s Coat of Arms, and also The Coat of Arms of the Duchess of Cambridge.

Have you ever attended an occasion of royal pageantry? We’d love to hear! Please tell us all about it and share your stories with us in the comments.