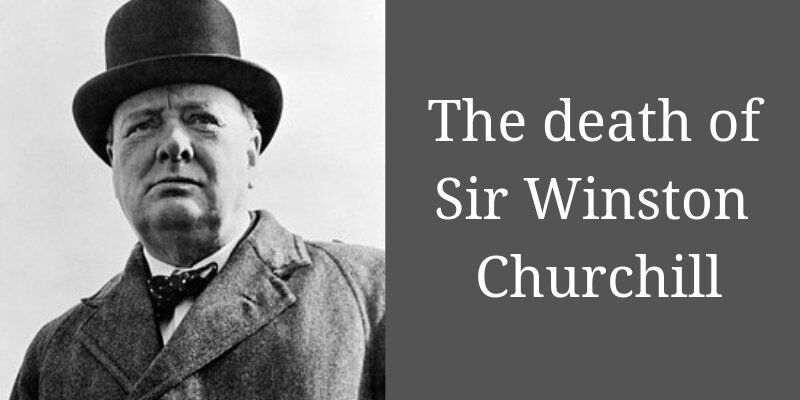 Sir Winston Churchill, one of the world’s most iconic leaders, passed away on this day in history, shortly after 8am on Sunday 24th January 1965.  He had suffered an extreme stroke and passed away at his home. Coincidentally, it was 70 years to the day since the death of his own father. He had been Prime Minister of the UK from 1939 to 1945, and led the country to victory following the turbulent years of the Second World War.

During those years of WWII, his leadership had inspired the population. His passion and courage helped to change the course of history. His rousing words and leadership during the blitz of London helped to hold the nation together.  Today, many people are familiar with his words and voice, which resonates down the years. In fact, Winston Churchill was named the Greatest Briton of All Time in a poll conducted by the BBC in 2002. His wit and lyricism have endured and here are just a few of his most famous quotes.

Quotes to inspire you:

You will never get to the end of the journey if you stop to shy a stone at every dog that barks.

One always measures friendships by how they show up in bad weather.

Success is not final, failure is not fatal: it is the courage to continue that counts.

You have enemies? Good. That means you’ve stood up for something, sometime in your life.

To improve is to change, so to be perfect is to have changed often.

To be really happy and really safe, one ought to have at least two or three hobbies, and they must all be real.

Nourish your hopes, but do not overlook realities.

You must look at facts, because they look at you.

I never ‘worry’ about action, but only about inaction.

Success consists of going from failure to failure without loss of enthusiasm.

For myself I am an optimist — it does not seem to be much use being anything else.

It is better to be making the news than taking it; to be an actor rather than a critic.

I have in my life concentrated more on self-expression than self-denial.

You never can tell whether bad luck may not after all turn out to be good luck.

The true guide of life is to do what is right.

Things are not always right because they are hard, but if they are right one must not mind if they are also hard.

You must put your head into the lion’s mouth if the performance is to be a success.

We hope that these quotes from the late great Sir Winston Churchill have inspired you! Which is your favourite and why?

You might also like to read our blog ‘The death of George V’. This article briefly examines the abdication crisis of Edward VIII, which occurred during the leadership of Sir Winston Churchill. (Churchill had advised against the marriage of Edward to the divorcee Wallis Simpson).