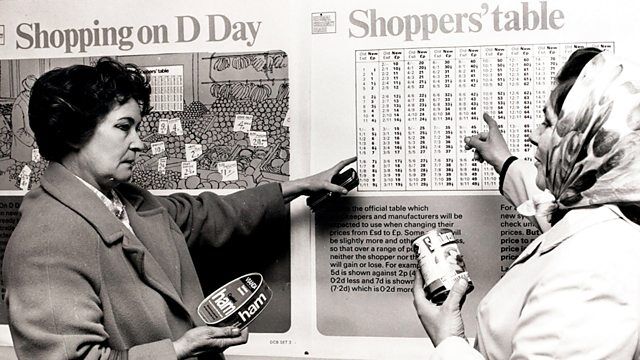 When decimalisation happened on February 15th 1971, it brought about a massive change to the British currency. Britain was not the first to convert to a decimal form of currency – for example Russia and France already used decimal currency systems, and had done since the 1700s. Here, we present our top ten facts about decimalisation, to mark the 28th anniversary of this momentous day in Britain’s history.

1: What were coins called before decimalisation?

Before 1971, the system of currency was very different.  For example, there were 12 pennies to the shilling, and 20 shillings to the pound. Also, there were guineas, half crowns, three penny bits, sixpences and florins.

2: Where did the old system come from?

Prior to decimalisation, the old system of currency was known as pounds, shillings and pence or ‘lsd’. This system dated back to Roman times when a pound of silver was divided into 240 pence, or denarius, which is where the ‘d’ in ‘lsd’ comes from. (lsd: librum, solidus, denarius).

A shilling, a farthing and a threepenny bit.

3: How did Britain prepare?

Such a monumental change in currency did not happen tot he nation overnight. To prepare for the changeover in systems, the Decimal Currency Board (DCB) was set up. They ran a public information campaign in the two years prior to the switch-over on Monday 15 February 1971. This was also known as ‘Decimal Day’. Posters of the time referred to it as ‘D-Day’. Plus, the banks were closed for four days before changeover to prepare for the event. 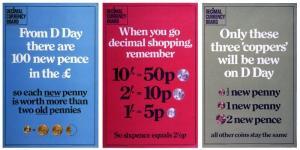 Posters helped with the changeover to decimalisation.

4: Were all the new coins introduced at once?

5: How did people compare the currency value?

Naturally, many people were concerned that unscrupulous shop-keepers would take advantage of the confusion caused by decimalisation. Fore example, many people believed that they would put prices up in the hope that they rate-hike would go un-noticed because of the change to decimalisation. To help, currency converters were made available. Plus, prices in the shops were shown in both the old currency and the new. currencies. This resulted in some of the worries being alleviated. 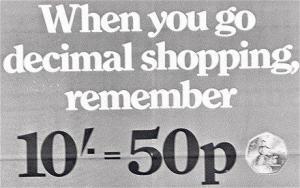 6: Did the change-over go smoothly?

The decimal day itself ran without a hitch, which is a testament to the forward planning and preparation. Naturally, some older members of the community found the switch-over difficult to adapt to. However, the general population embraced the new currency. Even today though, we sometimes hear the well-worn phrase of the time ‘How much is that in old money?’. The plan had been to gradually phase out the old money over an eighteen month period. People could pay in old money and get new money in change. However, as it happened the phase-out period ended as early as August 1971, just six months after decimalisation day itself.

7: What was the name for the new currency?

The original plan was that the new unit of currency would be referred to as ‘new pence’. In this way it would be distinct from  the old currency. However, this was very soon adapted to the abbreviation ‘pee’, and that is what we still use today.

8: What does ‘decimal’ actually mean?

The term ‘decimal currency’ describes any currency that is based on one basic unit with a sub-unit which is a power of 10, most commonly 100. It comes from the Latin word ‘decem’, which means ten.

9: Were there other ideas for the name?

Various other names for a new unit of currency had been suggested. These included the ‘new pound’, ‘the royal’ and ‘the noble’.

10: Will there be changes to the British currency in the future?

European counterparts adopted the Euro back in 2002, however Britain held firmly onto the pound. This is not something that is likely to change in the near future. Britain’s ‘pound sterling’ is a precious part of national identity for many. Who’s to say what will happen in the course of the next 100 years!

Did you know we have lots of other blog posts about historical events? Click here to see the range of articles. For example, recent articles have included ‘The traditions of Valentine’s Day’  and ‘The death of Winston Churchill’ .

Do you remember decimalisation / decimal day in Britain? Did you find it an easy or difficult experience? We’d love to hear your comments!