Transportation To The Penal Colonies 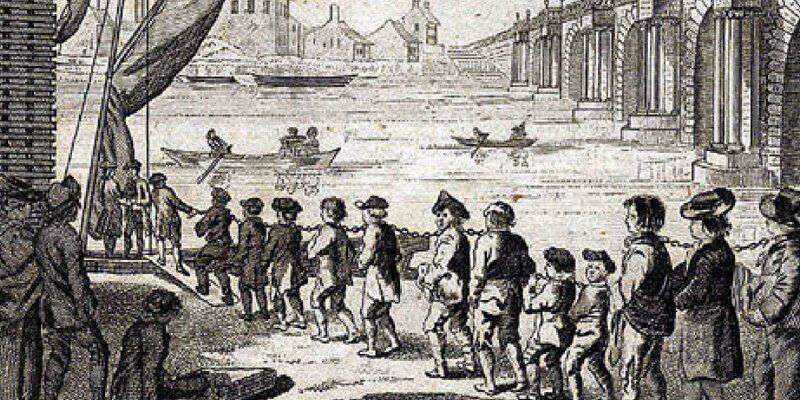 The 18th century was a time of exploration and trade. There was also a huge increase in crime. Transportation to the penal colonies was an answer to the problem of overcrowded, filthy gaols and also to shortages of workers in the new colonies.

There was also social unrest at the number of people being hanged for quite trivial crimes. Transportation to penal colonies offered the government an alternative to hanging.

Where were the convicts sent?

By 1775 there were 13 British Colonies in America. However, on Declaration of Independence in 1776, America refused to take any more convicts.  Other destinations were sought instead. In 1787-8 the first convicts were sent to New South Wales, to the natural harbour of Port Jackson, north of Botany Bay.

During the Napoleonic wars, labour was needed in the dockyards in England. Therefore fewer people were transported. For a short while the authorities favoured imprisonment in gaols in England. Prisoners were kept in solitary confinement or had to carry out hard labour.

However, after the war ceased, the gaols became full so the number of people being transported rose again. As well as New South Wales, convicts were also sent to Van Dieman’s Land (Tasmania) and Western Australia.The 1823 act also meant that convicts were sent to Bermuda.

How many were transported?

Transportation to the penal colonies occurred between 1788 and 1868.  During this time 165,000 convicts were transported to Australia. In the records compiled by one of the Bedford Prison Governors, Robert Evans Roberts, the abbreviation YT&PS is frequently used. It means ‘year’s transportation and penal servitude’. The Gaol records show that many individuals were sentenced to 7 or 14 years.

What crimes had they committed?

People saw transportation to the penal colonies as an alternative to the death penalty.  Therefore they admitted the more serious crimes including arson and highway robbery. Murderers, reprieved from hanging, were also transported. However, there were other significant groups of prisoners sent to the colonies. These included rioters, advocates of Irish Home Rule or Trade Unionism (the Tolpuddle Martyrs) and other political protesters.

People who had been convicted for theft, particularly if it was a second offence, were also sentenced to transportation. However, not all were hardened criminals. Penal Colonies were often situated in frontier lands, especially the more inhospitable parts, where prisoners’ unpaid labour could be useful in the times before immigration labour became available.

Sometimes people were sentenced for trivial or dubious offences to generate cheap labour. Most people transported from Bedford were not murderers, not all had been convicted before and some only for crimes such as poaching.

How long were the sentences?

The sentence could range from 3 years to life. Sentences of 7 or 14 years were common. However there was no procedure for return after the sentence expired. Prisoners went to remote areas making escape harder  and to discouraging their return. Only a handful ever came back to Britain, despite the varying lengths of their sentences.

When and why did transportation to the penal colonies end?

In the 1830’s, anti-transport champion Sir William Molesworth, a Member of the House of Commons Select committee, concluded that it did not work in deterring crime. He stated that they should abolish it in favour of gang labour on public works. By this time several well-established colonial areas refused to accept the convicts.

They were attracting emigrants who could carry out the labouring work. Settlers who had arrived legally resented having prisoners sent to them. Transportation had also become very expensive. Therefore, the government sought cheaper solutions to the criminal problems at home.

In 1840, Lord John Russell made new proposals. These suggested a mixed system. More prisoners would be kept on the hulks in England to serve their sentences and an experimental penitentiary would be built. Prisoners would continue to be sent to Van Diemen’s Land. Following this, more convicts would be transported to Bermuda.

Officials decided that every man would work the start of his sentence in Britian, on hard labour in public works such as road building. In 1839-40 transportation to New South Wales was discontinued. By this time, New South Wales was well developed and considered to be a desirable place for settlers. It was no longer a ‘punishment’ to send convicts there.

Transportation continued to Van Diemen’s Land until 1853. In 1849 transportation started to Western Australia. Other outlets were sought to take the prisoners but most refused. When the 3rd Earl Grey took over as secretary of state he proposed an ‘exile system’. Well behaved convicts were sent to Australia and receive their ticket of leave (freedom) on arrival. This was under the premise that they did not return to Britain.

Punishment for these men started with solitary confinement in prison.  This was followed by hard labour then assisted exile to colonies. To make this more acceptable to the colonies, the same number of free emigrants were sent. There was no shortage of prisoners opting for this, as conditions were much more favourable than on the hulks.

However the colonial authorities were not satisfied and a mass demonstration occurred on 11th June 1849 in Sydney. The government remembered the rebellion of the American colonies, and decided to end the system.

To search for your surname, simply visit the Victorian Crime and Punishment website here and type the name in the search box.

To order a surname history print, click here. Visit our full range of gift ideas that are sure to impress for all occasions by visiting our shop.