The Symbolism of Weddings 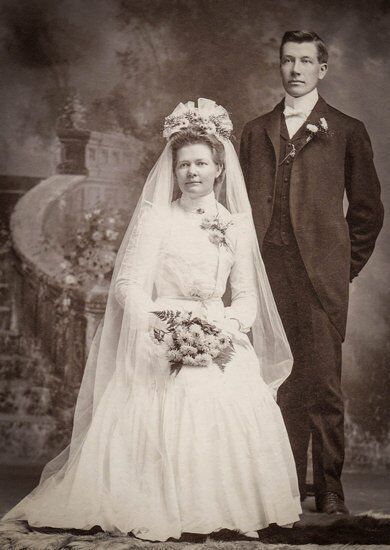 The Symbolism of Weddings

Are you organising a wedding? Making the big day special and meaningful is important whatever your budget. The history and tradition behind marriage is rich in symbolism and meaning. Many of the terms and symbols in modern usage originated centuries ago – here are just a few. You might get some ideas on how to incorporate symbolism into your wedding!

We often hear the phrase ‘tying the knot’ to symbolise wedlock. This comes from from a ceremony known as ‘handfasting’ during renaissance times. This is where hands join in front of witnesses, so that from above the hands appear locked in an infinity symbol.

Traditionally undertaken in rural areas, handfasting symbolised the union between man and woman for a year and a day, after which they could renew again or marry permanently. Why not consider handfasting in your ceremony?

The wedding bouquet, such an important part of modern ceremonies, is traditionally used to symbolise happiness. It is made up of herbs that are rich in symbolism connected to the couple.

For example, garlic might be used to ward off evil spirits, dill represents lust and sage wisdom. In later times, flowers became popular as part of the wedding bouquet and are just as rich in symbolic meaning. For example, lilies mean purity and ivy means fidelity. Check with your florist – he or she is likely to be able help you with ideas on how to incorporate symbolism into your wedding bouquet.

Nowadays the engagement ring is traditionally the first visual symbol of a couple’s engagement. In medieval times, a groom would frequently pay for a bride’s hand in marriage and precious stones often formed part of this payment. The tradition of using precious stones to symbolise a person’s intent to marry remains undeniably strong today.

The choice of stone is down to individual taste and budget. For example, precious stones such as diamonds, emeralds, rubies and sapphires are all traditional gems, but semi-precious stones such as aquamarine can also be a popular choice among brides. Brides might also consider choosing a birthstone to feature in the engagement ring. Furthermore, experienced jewellers are likely to be able to offer additional advice.

These traditions, and many more, are of course, steeped in history and symbolism. Tell us how you plan to incorporate symbolism into your own wedding and why!

Find out if we have the history of your surname.  Our Double Coat of Arms print is the ideal wedding gift.