The Elements of a Coat of Arms – Heraldry 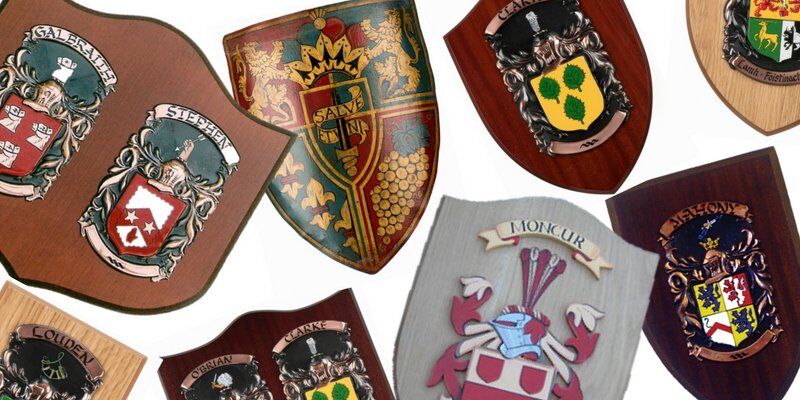 The Elements of a Coat of Arms – Heraldry

The Elements of a Coat of Arms. The primary components of heraldry and their individual meanings are fascinating to those researching their surname history or coat of arms. The essential parts are in brief as follows:

This device was worn on top of the helmet and was usually made of wood, metal or boiled leather. It provided the double advantage of easy identification and the addition of height to the wearer. In heraldry today, the crest and coat of arms are usually on display together.

The Torse (force or wreath)

Formed by two pieces of silk twisted together by the lady who chose the bearer for her knight, the torse was used to hold the crest and mantling in place on the helm.

The motto generally evolved from the watchword or war cry of the family. Often, the motto contained an allusion to a memorable event in the family history, for example, the Bruce Motto (‘Fuimus’ – Latin, ‘We Were’) refers to the fact that the family were once Kings of Scotland. You can also find out more about Scottish Clan Histories here.

Originally, the term meant the coat worn over a knight’s armour. The oldest coats of arms were generally of a very simple design, with crests and mottoes being added later. Complex arms were usually as a result of many generations of enhancements or honours that were duly recognised. Furthermore, heraldry was enriched by the constant necessity to achieve distinction.

The Helm (Helmet, Casque or Morion)

These varied in shape in different ages and countries. The esquire’s Helm, as depicted in family coats of arms, is depicted with closed visor and facing to the left.  If a device is described as ‘sinister’ it faces to the right as the viewer looks at it (and to the left or ‘sinister’) of the wearer.

This was spread over and draped from the helmet, serving as protection and also preserving armour from rust.