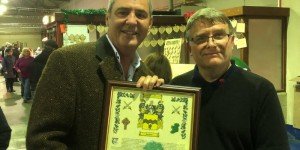 We hope you have enjoyed these ten things you might not know about Ireland! Plus, You could discover all sorts of things about your Irish name, like actor Neil Morrisey recently did! (Click here to read news post). Find more about your own Irish surname by clicking here. We have a wide variety of products featuring Irish surnames.  Be sure to visit our shop for some fantastic gift ideas that are sure to impress for all occasions.