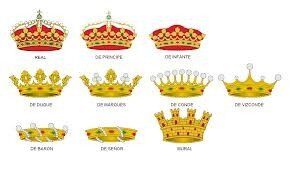 Have you ever wondered about the significance of crowns of heraldry or those you find on a coat of arms? Appearing as part of the charge on a coat of arms, or set upon the actual shield, the heraldic crown signifies the status of its owner. The seven crowns listed below are notable ones that you commonly find on coats of arms.

A gold rim which eight sharp rays, of which five are visible, given to those British subjects that have distinguished themselves in the east.

closely resembling the antique crown but with a five pointed star on each ray. It was frequently given to those institutions or people connected with the church.

An emblem of victory, empire and sovereignty

Also known as a crown palisado, this has palisades on the rim, forming the spikes of the crown. It was traditionally an award to the one who first enters an enemy camp after breaking through the defences.

This incorporates a studded rim with alternating crosses and fleurs-de-lys, with four bands of metal, meeting on a small cross with a ball in the middle. It is a particularly rare crown, generally only appearing on a few crests.

A plain gold circlet of battlements, appearing on a narrow rim. As such, this crown is sometimes in use as a token of civic honour.

This crown is certainly unique in that it is ornamented with alternating topsails and sterns of galleys. It is often an award to distinguished naval commanders.

Find out what the symbols are on your own coat of arms by clicking here and searching for your surname.  Check out the coat of arms and surname history for your chosen name.