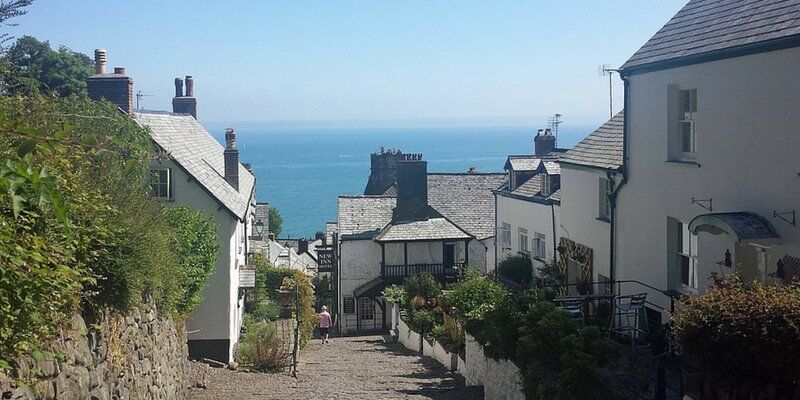 The beautiful and picturesque cobbled village of Clovelly Devon is one of the county’s most popular visitor attractions. Its steep myriad of streets and lanes wind their way past fascinating houses and traditional shops, down to the quaint and tranquil harbour below.

Look out for Hall of Names surname histories in the former post office on the left hand side as you walk down the high street. The entire village is for pedestrians only. There is ample parking available at the top of the village and a land-rover taxi available for those who require vehicle assistance.

Profits from entrance fees are put back into the upkeep of this important historic site. There is a visitor centre at the top of the village, where souvenirs and a wide choice of gifts are available. It is an award-winning centre, its design based on a Devon long barn.

The history of Clovelly is a long and interesting one and it been associated with just three families since the middle of the 13th century, a period of nearly 800 years!

At the time of Clovelly’s inclusion in the Domesday Book, it was under ownership of the King. But this was acquired by Giffards, a family of Norman origin. By 1370 marriage and purchase brought the ownership of Clovelly to Sir William Cary, a member of one of the great Devon families. He was reputedly the builder of the original pier the foundations of which still rest on massive boulders slotted together.

Sir William’s elder brother, Sir John, was a judge and Baron of the Exchequer in 1370, but owing to dynastic intrigues he was banished to Ireland and his lands confiscated. Sir John’s son, Robert, was to be brought up in William’s household.

His fortunes turned when, at a Royal Tournament in 1413, he defeated the Knight Errant of Aragon who until then had been unconquered throughout Europe. Robert was immediately given a knighthood by Henry V and his father’s lands were given back to him.

The Cary’s and Clovelly Devon

The Cary’s arms to this day include the ‘three roses argent’ of the Aragon Knight. The Carys lived in Clovelly Devon for the next eleven generations. However, the the Cary line eventually died out because subsequent generations did not marry or were childless.

In 1738 Clovelly was sold to Zachary Hamlyn for £9438. Over a century later, Christine Hamlyn Fane, was to have the Clovelly Estate (in 1884). In 1889 she married Frederick Gosling. She requested him firstly to change his name from Gosling to Hamlyn. This is because of the long association of the name Hamlyn with Clovelly Devon.

Secondly, she asked him to devote his not inconsiderable fortune to the restoration of all properties on the estate. As you walk down the village street you will see many houses inscribed with the initials CH and FH and a date. The dates mark the renovation of the building to meet modern-day standards. However, the foundations and outer walls are much older.

Christine and Frederick, didn’t have any children, and so the estate was given in 1936 to Christine’s niece, Betty Asquith. Betty and Arthur had four daughters. Mary, the eldest, married Keith Rous from the Henham Estate in Suffolk in 1943. She inherited the Clovelly Estate on Betty’s death in 1962.

Her son, John Rous, took over the running of the estate in 1983. Visitors to Clovelly today can expect a wide variety of traditional shops to explore, including a sweet shop for those in need of energy for the steep walk down to the harbour…and back up again!

Some of the buildings are available to explore. There is also a fantastic craft centre where you will find hand-made toiletries and silks. There’s also a pottery where children can have a go at making their own keepsake to take home. The donkeys are also a memorable part of the Clovelly experience!

Why not consider a trip to beautiful Clovelly, Devon? There is a choice of accommodation on offer – click here for details, and we hope you enjoy your trip!

Find out if we have the coat of arms and surname history for your name by clicking here.