Surnames on the Titanic 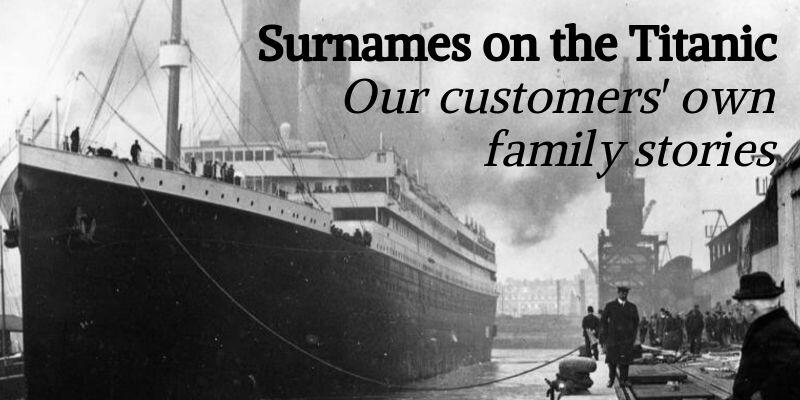 Of all the surnames on the Titanic, our customers are often amazed to discover that their own name featured on the ill-fated ship. Our recent Facebook post highlighted some amazing family stories from our own customers, who had ancestors on the Titanic. We are thrilled to share them here with you.

How we made our customers’ discoveries

We often share our blog posts on our Facebook page, and recently shared an article about passengers on the Titanic. This post prompted a great response, because The Titanic remains a source of fascination to many. Similarly, whenever we ask customers about their surnames, they often want to know if it features on the Titanic passenger list. We asked: ‘Was anyone with your surname on the Titanic?’

Of the many replies we received, there were two that certainly got our team talking. When we read Margaret Coles’ comment, we obviously knew we had to investigate further. She said ‘Our Gran’s family ‘Sage’, 11 family members perished’.

How did we investigate the surname Sage?

In the first instance, we immediately checked the surname history scroll for the name Sage to see if our own records showed the surname on the Titanic. For example, we hoped it might mention one or two of the family members.

In fact, it mentioned all of the eleven family members on board the Titanic. Knowing this, we knew we would also be able to find out more about them. So, we followed the link from our own blog to a Titanic website which lists passengers. Amazingly, we not only managed to find every single one of the family members there, but also found that some of the surnames even had accompanying images.

When we checked with Margaret, she said that she’d only discovered the family tragedy last year, as her brother is undertaking family research. Margaret mentioned a book she had read called ‘Women and Children First’, which showed a beautiful photograph of the Sage family. We provided a link to their specific biographies, which are both fascinating and heart-breaking. Theirs is just one of the many tragic stories of the surnames on the Titanic. 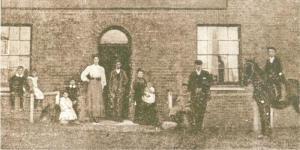 The Sage family, who sadly all perished on the Titanic.

Who were the Sage Family?

Margaret’s eleven ancestors boarded the Titanic in Southampton, as third-class passengers. Their full names were as follows, plus their ages. The parents are at the top of the list:

Anthony William, aged 12. The only family member whose body was recovered.

It is heartbreaking to think of the fear that the family must have all experienced as the Titanic struck the iceberg and began to sink.

Why were the Sage family on the Titanic?

In transpires that the Sage family are very well documented and that there are many online resources that tell the story of their family on the Titanic. Looking into the Sage surname, we discovered that the family were from London. The father of the family was John George Sage and he had married Annie Elizabeth Cazaly. They had nine surviving children by the time they sailed on the Titanic.

The family was relocating to Jacksonville, Florida where John planned to grow pecan nuts. Some reports say that daughter, Stella, reached a lifeboat but got out when the rest of her family could not join her. Very sadly, the entire family of eleven perished. Only the body of son Anthony William was recovered (by the ship CS Mackay-Bennett, the first ship contacted by the White Star line to recover bodies). Of course, it is well-documented that many third-class passengers perished. When we asked Margaret what she knew about the family she said ‘My brother Peter messaged me one day a couple of years ago and told me all about it. I was amazed as our Great Grandmother, whose name was Sage, never spoke about it…’

We are extremely grateful to Margaret for allowing us to share the tragic story of her ancestors on board the Titanic.

To view details of the Sage family or search for your own surname on the third class passenger list of the Titanic, click here. 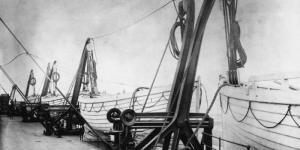 Titanic lifeboats: many third class passengers never made it to these boats.

We were already excited to discover all about the Sage family, we were similarly intrigued by Joanna Maria Pazos Stead’s comment. Joanna mentioned that she had an ancestor called William Thomas Stead and that he had perished on the Titanic. We just had to find out more and certainly had to follow up o this intriguing story. Again, our first port of call was to look at our own surname history scroll for the name Stead. It confirmed that William was on board the liner, and that he was aged 62, a first-class passenger from London.

Who was William Thomas Stead?

We went back to the passenger list, this time looking at first class passengers and in particular the surname Stead on board the Titanic. For example it was thrilling to discover a photograph of William, and we shared this with Joanna. She confirmed that it was definitely her ancestor and even said ‘he looks like my father and my grandfather’! 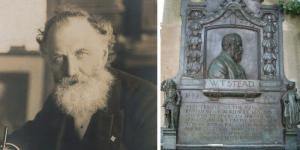 Desperate to know more, we asked Joanna if she knew of any further information. She explained that her Great Grandfather had told her Grandfather that William had doubts about boarding the Titanic before it even set sail. ‘He was very uneasy about the trip. He was also a medium but better known as a journalist. The only thing I have is word of mouth really’. If you would like to read more, the Titanic’s first-class passenger list contains a full and fascinating biography of Stead.

Also, confirming Joanna’s comments about Stead’s doubts, ‘The Vintage News’ website states that he had eerily written a short story called “How the Mail Steamer Went Down in Mid Atlantic, by a Survivor,” which was published in the Pall Mall Gazette in March of 1886. We are very grateful to Joanna for highlighting her ancestor’s story.

If you would like to discover more about your own surname, then you can order your own coat of arms and surname history print here. For those of you with a specific interest in news reports of the Titanic, there are many websites to choose from, but we found the Encyclopedia Titanica to be extremely comprehensive. If you would like to see newspaper reports of the day, bound in a hardback cover, then you might like have a look at our ‘Titanic Newspaper Book’.

Can you help with information about your family surname on the Titanic?

Do you know of any family members that were on board the Titanic? We would love it if you could share your photographs and stories with us. Plus, you could be adding information to an important national record! You can either comment on this post, call us on 01984 632120 or email jo@hallofnames.org.uk