St George’s Day and Its History 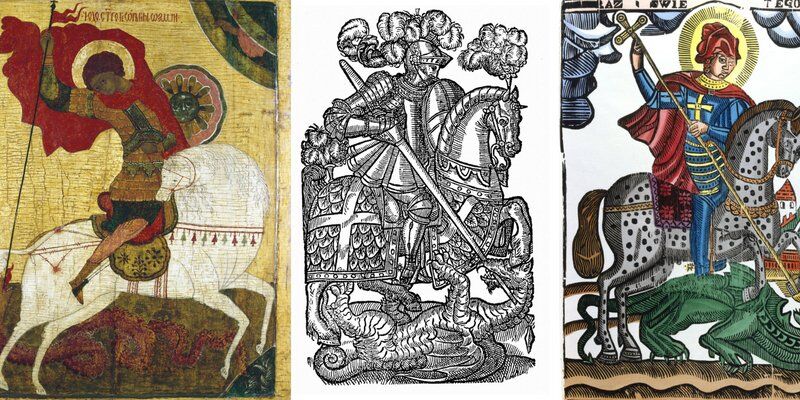 St George’s Day and Its History

Ever wondered why we celebrate St George’s Day, or who St George actually was? The name and legend of St George have endured for over 1700 years, and the mere mention of his name is synonymous with valour, gallantry and bravery.

It is hard to quote specific facts about St George’s life, owing to the passage of so many years. That said, there are some widely accepted stories concerning his life. Read on to discover more…

Where was he born?

It is said that he was born in A.D. 270, to Christian parents, in a part of the world now known asEastern Turkey. After moving to Palestine with his mother, he became a Roman soldier, where he rose through the ranks.

In protest against his pagan leader, (the Emperor Diocletian), he resigned his military post. Despite subsequent imprisonment and torture, he remained true to his faith, rejecting Rome’s persecution of Christians.

Such fierce determination led to the Emperor’s further enragement, and he punished St George by having him dragged through the streets of Nicomedia. He was then beheaded. This was on April 23rd A.D. 303, when St George would have been the age 33.

Such brutal treatment, coupled with St George’s unwavering loyalty and faith, led the Emperor’s wife to become a Christian. She too was executed for her faith.

When did he become patron saint?

Although the Council of Oxford declared April 23rd to be St George’s Day in 1222, it was not until more than a hundred years later, in 1348, that St George became the patron saint of England, replacing St. Edmund the Martyr. However, It is unlikely that St. George ever actually visited England.

Through history, the story of St George and the dragon is one that has endured. In the middle ages, dragons were commonly in use as metaphors for the devil.  Legend has it that villagers from the Libyan town of Silene had run out of sheep to offer as sacrifice to the dragon that guarded their water supply.

The King’s own daughter was on offer instead, whereupon St George dismounted his white stallion and drew his sword, protecting himself with the sign of the cross. He slayed the beast and saved the princess, resulting in the people of Silene abandoning their pagan beliefs and converting to Christianity.

St George is known by his emblem of a red cross on a white background, and is part of the British flag. The emblem was adopted by Richard the Lion Heart and the King’s soldiers wore it on their tunics.

Despite the fact that St. George is the patron saint of England, few people, when questioned, know the actual Saint’s day. It is more likely that you will see Ireland’s St Patrick’s Day being celebrated in England than it is St George’s.

That said, there are many who believe that St George’s Day should be a national holiday. What do you think?

Find out if we have the coat of arms and surname history for you surname by clicking here.