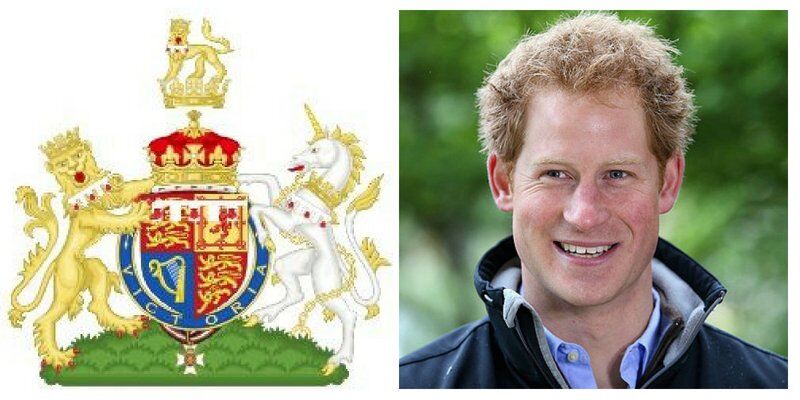 Prince Harry is fourth in line to the throne. His full title is ‘His Royal Highness Prince Henry of Wales’. The youngest son of The Prince of Wales and Diana, Princess of Wales. He was given a grant for his own coat of arms twelve years ago by his grandmother, Her Majesty The Queen, on his eighteenth birthday.

Prince Harry was of course personally involved in the choice of design in his coat of arms. This incorporates an emblem from the family arms of his mother, Diana, Princess of Wales. The Prince’s Coat of Arms is similar to that of his brother, The Duke of Cambridge.  However, his has five white labels and three escallops, which derive from the Spencer family’s Coat of Arms.

The Coat of Arms

The Queen personally authorised the unique coat of arms for Prince Harry. It also features a small, red escallop from the Spencer coat of arms. The escallop appears three times on the first, third and fifth points on white collars around the lions, unicorn and shield. In addition, the collars or labels, as we know them, can only be used for arms of the sovereign’s children or the eldest son of The Prince of Wales.

The crest features a lion and unicorn either side of a shield. This is then topped by a coronet and a second, smaller lion.  In heraldic terms, the lion has always held a high place. As such it is one of the most popular images in European heraldry. It is the emblem of deathless courage and hence that of a valiant warrior. The unicorn is famous for its virtue, charm, courage and strength. These images perhaps ideally suit Prince Harry’s coat of arms. Consequently he is known worldwide for his service in the armed forces, and for his charitable work – most notably his polar treks and the forthcoming ‘Invinctus Games’ for wounded soldiers.