Pembroke Castle Has a Fascinating Heritage 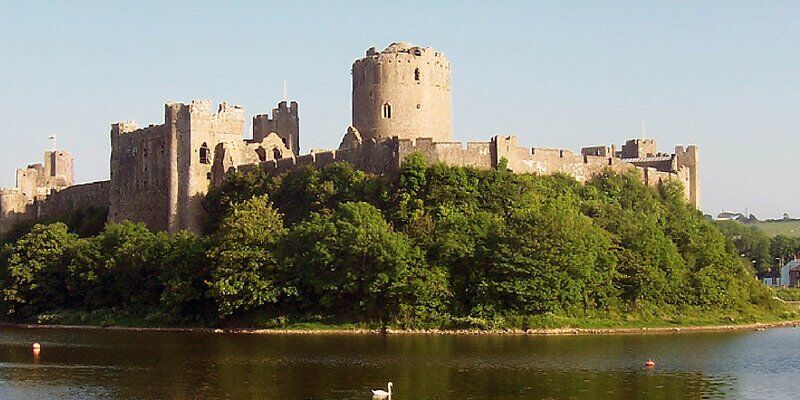 Pembroke Castle Has a Fascinating Heritage

History is well and truly brought to life at Pembroke Castle, where visitors find plenty to explore. The fascinating history of this imposing medieval fortress, steeped in British history, was the birthplace of Henry VII, who inaugurated the Tudor line of monarchs.

First of all Pembroke Castle is described as a true wonder of Wales. The castle is in an idyllic position on the banks of the river estuary, and overlooks Milford Haven. It is the only castle in Britain that is built over a natural cavern. It is one of the few castles in private ownership in Wales. Pembroke Castle has humble beginnings. It was built as a small earthworks and rampart on a strategic rocky promontory in 1093, by Arnulf de Montgomery.

A few years later its occupants defended the castle from a siege by the Welsh, despite being near starvation. Its position, surrounded by a natural defence of water on three sides, meant that it was harder for attacking forces to conquer: they only had one direction in which they could undertake an assault.

The structure of the castle itself is fascinating and a source of intrigue for visitors. The late 12th century keep is both an outstanding feature and architectural novelty, for it has a massive cylindrical tower with an unusual stone dome.

In the late 13th century, it was to be completely built in stone. This included a great hall and an impressive 55-step spiral stairwell leading down to the cavern beneath the castle. This cave is the creation of water erosion. This may have served as a boathouse to the river, where it was much easier to transport people or cargo.

Another absorbing feature of the castle is the gatehouse, which had a complex barbican and no fewer than three portcullises. The outer-wall is a construct of Ashlar (finely-dressed stone). It is 5 metres thick in some places.

During the troubled reign of King Charles I, the castle was under attack by both Royalist and by Roundheads as the sympathies of its occupants altered. In the latter stages of the struggle an attacking force was led by Cromwell himself. He ordered the destruction of the castle and encouraged townsfolk to disassemble the stones fortress and use the stones for their own purposes.

Following his death, in 1959 a Trust was set up by his daughter, Mrs Basil Ramsden. As such this comprises 3 family members and 3 nominated by Pembroke Town Council. At this time, Sir Ivor Philipps’ great grand daughter is the current Chairman of Trustees.

Over the past ten years, there has been a lot of effort to tell the fascinating history of the castle. Consequently, this encourages visitors with a whole host of events. There are some great hands-on family days out planned for this year. As a result, these include falconry days, living history days, dragon days and the ever-popular Knight School. Free guided walks are inclusive in the admission price.

Have you attended one of the Pembroke Castle days recently? If so, please share your experiences and let us know your favourite bit!