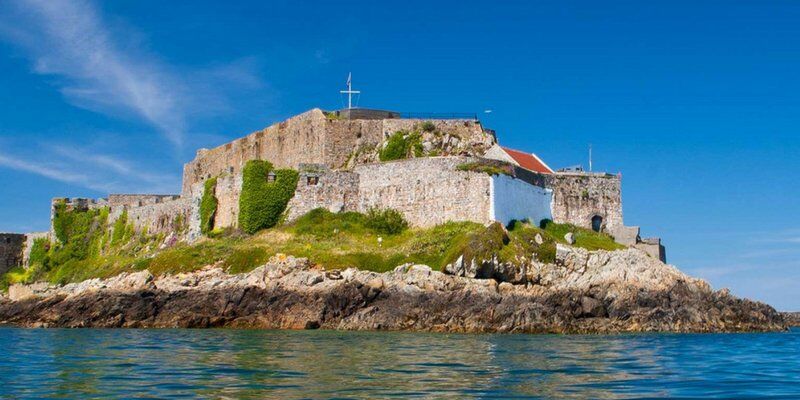 The stunning view never fails to impress visitors to Guernsey Castle Cornet. Top cruise liners regularly visit the island, and passengers flock to visit this most imposing of castles. The history of the castle is tumultuous and fascinating…

From its thirteenth century origins to the present day, Guernsey Castle Cornet has played a pivotal role on the island of Guernsey. The Channel Islands first became possessions of the English Crown in 1066 when William, the Duke of Normandy became William I, King of England.

Some 138 years later, King John lost possession of Normandy, but retained the Channel Islands, and Castle Cornet was constructed to defend against possible French invasion.

The castle is built on a small island off the coast of Guernsey, to defend the busy trading harbour of St Peter Port. It has a strong natural position.  The sea surrounds the castle and it is only accessible on foot at the lowest tides. Before the enlargement of the harbour and the building of the Castle Emplacement, Guernsey Castle Cornet was nearly a mile off the shore of Guernsey.

Although the French captured the Castle in 1338, and held it for seven years, it was reclaimed in 1345. These conflicts were to take a terrible toll on the fabric of the castle, and significant rebuilding was necessary. 90 years later, its first tower was constructed to take cannon.

During the reigns of Henry VIII and Elizabeth I, new outer walls and fortifications were to be built. They were needed to protect the mediaeval fortress from cannon, which by this time were more readily used. The works undertaken at this time form the basic outline of the castle as it can be seen today.

Moderations were made to the castle in subsequent years. However, it found itself under siege again during the English Civil War. Guernsey had declared for Parliament, but the Governor of Castle Cornet, Sir Peter Osborne, had remained loyal to King Charles I. Castle Cornet was the last Royalist stronghold to surrender in 1651.

Tragedy struck the castle again in 1672, when lightning caused a fire which destroyed the Governor Lord Hatton’s living quarters.  Not only this the chapel and mediaeval great hall we also destroyed. These parts have never been rebuilt. Lord Hatton survived, but sadly his wife died, as did his mother and five other people. No Governors ever lived in the castle again.

What a long and tumultuous history the castle has endured! Standing strong today, it is now the most popular tourist destination on the island of Guernsey.

What to see on your visit

You can find the story of the castle and other aspects of Guernsey’s past in the five museums housed within the Castle. These comprise The Story of Castle Cornet, 201 Squadron (RAF) Museum, Maritime Museum, Royal Guernsey Light Infantry Museum and Royal Guernsey Militia Museum.

There are four historic gardens within the castle walls, lovingly tended by the castle keepers. They keep them free from weeds, dead-heading and watering daily. The keepers have also recently transformed many areathe s of castle. These are not formal gardens but serve to make the castle an interesting horticultural experience.

To find out more visit the Castle Cornet website here.  Interested in the Jersey War Tunnels?  Find our more here.

Have you visited Castle Cornet? What was your favourite bit? Share your experience here!

Discover the coat of arms and history of your surname by clicking here.