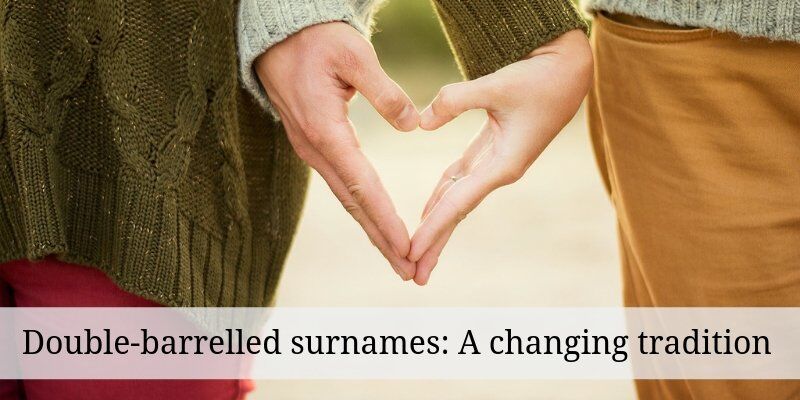 Where did double-barrelled surnames originate? They are more popular than ever, and customers often ask us if we have them on our Hall of Names database. Sadly, we don’t and in this article we explain why. We look at the early origins of the tradition, and how it was used as a social construct signifying wealth and status. And then more recently how double-barrelled surnames are used in blended families, often signifying equality.

Surnames connect us to our past, and are now a way of celebrating our present. There are four types of surname, which are geographical, patronymic (from the father), occupational, or descriptive (read more here). In recent years, name choices have become more fluid, and double-barrelled surnames have proliferated. Thereby, they often celebrate two family lineages simultaneously.

When did women start to take their husbands’ surnames?

A recent YouGov article stated that ‘the practice of a woman taking her husband’s name upon marriage is not as old as you might think. According to Dr Sophie Coulombeau, the habit began in the 15th Century and had become widely adopted by the 17th Century. Prior to this, a married woman was considered to lose her surname upon marriage and have no surname whatsoever!’

Where did the tradition begin?

When did others adopt the tradition?

It is no longer an easy task to distinguish a double-barrelled surname that comes from an aristocratic line, from a more recently created one. And should we even bother to try? Do these things matter to us any more? Some people connected surnames in order to preserve both families’ identity and lineage. However, others have been accused of pretentiously trying to gentrify their image. This isn’t a new thing. Back in Tudor times, some of those in the gentry who bought the lands of the dissolved monasteries, chose to create double-barrelled surnames. In this way they could align themselves with the land-owning aristocracy.  By the mid-nineteenth century, doctors, lawyers, and people in similarly professional positions, chose to use double-barrelled surnames. It was a declaration of where a person wanted to be in society, and how they wished to be identified. 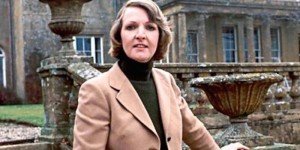 If you went to a comprehensive school, can you remember having lots of friends with double-barrelled surnames?  Likely not. However, that trend is changing rapidly. (Interestingly, it is combined with an increase in popularity of hyphenated first names. One in six girls’ first names contained a hyphen in 2019. Source: Telegraph). According to a recent article in the Guardian, eleven percent of young newlyweds now combine their names. Plus, they pass them on to their children. Others choose to use a surname as a middle name, thus continuing the connection in that way.

A good example is that of a modern-day football team. Look at the list of names: many of the players are likely to have a double-barrelled surname. Even allowing for the fact that football has become a more middle-class profession, this shows that double barrelled surnames are no longer the preserve of the upper tiers of society. 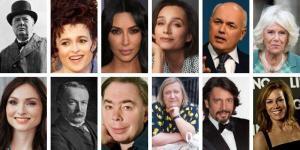 Can you identify these famous people with double-barrelled surnames?

Gender equality, and a desire for a ‘collected identity’ is what drives many people to combine surnames in this way. If parents of a child are unmarried, then giving the child a double-barrelled surname can be a way to celebrate the joint parentage. Using a double-barrelled surname is also popular with those in civil partnerships and same-sex marriages. It can certainly create a headache for genealogists!

Another point worth mentioning here is that more than a quarter of young Britons believe that it is easier to land a work placement if you have a double-barrelled surname. (Source: Debretts). The belief is that your surname is an important part of being able to get on in life, along with where you went to school and your accent.

Research by YouGov (2016) found that ‘the majority of women (59%) would still like to take their spouse’s surname upon marriage – and 61% of men still want them to do so. Surprisingly, given the shift away from traditional values among younger people, younger women are just as likely to want to take their spouse’s name than older women’. 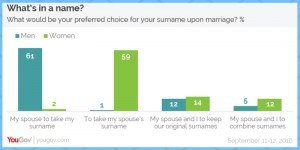 If a wife decides to take her husband’s surname on marriage, then the marriage certificate itself is proof enough to get a new driving licence, passport and other such important documentation. However, if a wife wishes to use a double-barrelled surname, then she must get a deed poll as proof of this new identity. If the husband is also planning to use the same double-barrelled surname, he can apply prior to the marriage. Then, when the wedding takes place, the name will appear on the marriage certificate. This means that the bride will not need to apply.

Types of double-barrelled or ‘combined’ surnames

Sacha Baron Cohen (although interestingly his cousin uses a hyphen)

Helena Bonham Carter (who describes the hyphen as ‘optional’)

A recent example of a ‘blended surname’ or ‘meshed surname’ is that of television celebrity Dawn Porter. When she married actor Chris O’Dowd, she adopted the ‘O’ from his surname and changed her own to O’Porter. In this way, she retained her own surname and took an element of his.

What do you think?

So, are we heading for a generation of quadruple-barrelled surnames, with hyphenated first names? Are double-barrelled surnames and hyphenated first names simply a sign of aspiration and social climbing, or do they show a genuine flair for creativity and equality? The Telegraph quoted Peter York, the commentator on British class trends and author of the Sloane Ranger Handbook. He said it suggested a fad for “bling with names”. “It does sound mock-posh to me. Anything with involving a dash I think people think of as being sort of posh. I will put it all down to the influence of Hyacinth Bucket”.

Do you agree? Have you or someone in your family chosen to combine names in this way? We recently asked our Facebook community and here are a few of the comments kindly provided:

“to stop the name dying out”.

“Uniting of two great family blood lines and stop surnames from dying out… It’s more and more common in blended families, or people don’t want lose their own identity”.

“I am proud to have my surname and I am proud of my heritage… It isn’t famous or anything but I have been researching it with my mom for most of my life, and I’ve learned so much about it I wouldn’t want it to die after me”.

“To join two families, to avoid the woman losing her identity. Some do it for children as they are not married. Some names however become a little bit of a joke and people need to consider it when choosing to do this”.

Please share your thoughts with us – we’d love to hear what you think.

Hall of Names and double-barrelled surnames 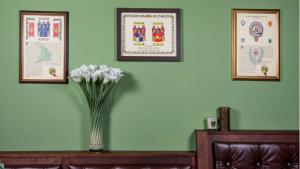 Our Hall of Names surname history scrolls database only contains single surnames, and the earliest coat of arms related to the name. As explained in this article, many double-barrelled surnames are relatively recent. Therefore they will not have a coat of arms dating back hundreds of years. That said, we have many gifts that celebrate two surnames. For example, our double coat of arms scroll displays two coats of arms side-by-side. We also have a wide selection of hand painted shields available, such as our double oak shield or double hardwood shield. Have we got your surname? Why not check by typing it into the family name search box at the top of this page? 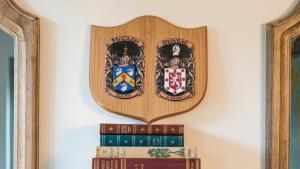 If you would like to discuss any of your requirements, please do not hesitate to call our friendly team on 01984 632120. Alternatively, you can always browse our range here on ‘shop all products‘ or by category. Thanks for your interest.