Who’s Who In Your Family? 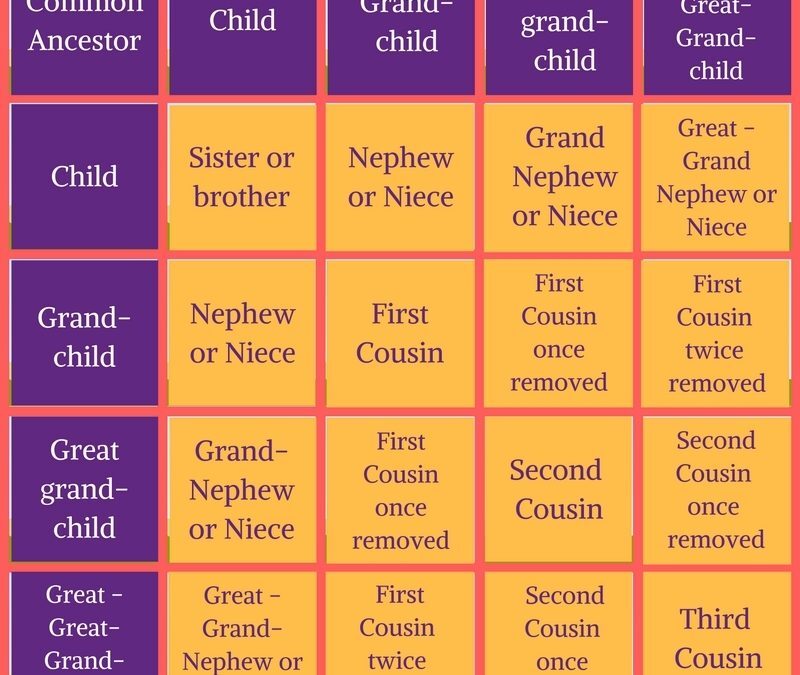 Do You Know Who’s Who In Your Family?

Do you know your first cousin from your second cousin once removed?

We are all familiar with the standard terms for our immediate family members but do you really know who’s who in your family?  Mother, father, brother, sister, aunt, uncle, cousin are all terms that most family members would understand straight away. But what about the more complicated patterns of family relationships?

If someone introduced themselves as your first cousin once removed, would you know what he or she meant? We rarely speak in such specific terms, often preferring to speak in terms of ‘distant relations’, and we are not familiar with what the correct terminology actually means.Here is a quick guide to help you through the minefield of family name descriptions!

Starting with a phrase that we are all familiar with, your cousins are the people in your family who share the same grandparents as you, on either your mother or father’s side. Put simply, the children of your aunts and uncles (brothers and sisters of your mother and father)

We often hear the term ‘removed’ being used to describe relationships within families. Put simply, this means that the two people being referred to are of different generations.

You are in the same generation as your cousins because you are both two generations younger than your grandparents but do you know who’s who in your family?

A relationship chart helps to simplify things and is a handy, quick-reference tool. Have a look at the chart above., which will hopefully give you a good idea of how the different members of your family are related.

1. It’s fairly easy to find out who’s who in your family. Choose two members of your family and work out which ancestor they have in common. For example, if you pick yourself and your cousin you would have a grandparent in common.

2. Look at the top row of the chart to find the first person’s relationship to the common ancestor. (For example, in this instance, that first person is you, so you are the ‘grandchild’)

4. Find where these two columns meet. In our example, the chart shows that those sharing a grandparent as a common ancestor, are first cousins.

We hope that this quick reference guide will help you to discover the correct terminology when referring to distant members of your family.

Find out if we have the coat of arms and surname history for your name here. We have a wide range of gifts that are sure to impress for all occasions.  Visit our shop for some inspiration!