The Story of Surnames 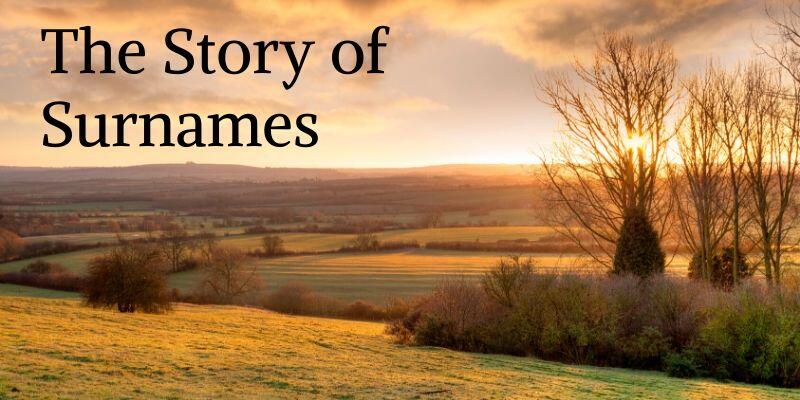 Have you ever wondered about your surname origins? Or when people started using surnames (last names) and why? This article, kindly provided by Historic UK, gives you an overview of where surnames originated and why.

In England, surnames are also commonly known as last names due to the practice of writing the given names first and then the family name or surname last. Surnames weren’t widely used until after the Norman Conquest in 1066. As the country’s population grew, it became necessary to distinguish between people and so names began to include descriptions of the person, such as Thomas son of John, Peter the Baker, Richard the Whitehead, Mary Webster, etc. These descriptions would grow to form the surnames we recognise today. The origin of the surname is often very clear!

To begin with, surnames were fluid and changed over time, or as a person changed his job. For example, John Blacksmith might become John Farrier as his trade developed.The introduction of parish registers in 1538 helped establish the idea of hereditary surnames. However, it was still common in some parts of the country to find a person entered under one surname at baptism, married under another name and then buried under a third. Today there are perhaps as many as 45,000 different English surnames, derived from all kinds of origins. For example, these could be nicknames, physical attributes, trades, place names and so on. For a copy of your own surname’s history, click here.

The history of surnames can be traced back hundreds of years

Irish, Welsh and Highland Scottish names mostly derive from Gaelic personal names whereas traditional English and lowland Scottish surnames also reflect society as it was in the mid to late Middle Ages. Common surnames such as Smith, Wright, Fletcher, Knight, Cook, Squire, Taylor and Turner are all based around medieval trades or occupations. Some surnames derive from personal traits or looks, such as Armstrong, Swift, Red and Short. Those derived from where the person lived might include Hill, Dale, Bridge, Forest and Wood; also York, Lancaster, London and so on.

Another common way of distinguishing people would be ‘son of’, for example Johnson (son of John), Richardson, Wilson, Harrison etc. An ‘s’ at the end of a personal name also meant ‘son of’, for example Richards, Stevens, Williams and so on. Many Welsh surnames follow this pattern, with Jones (from ‘John’s son) being the most common. Sometimes a middle name might become a surname. For example, a child christened John Oliver might result in later generations adopting Oliver as their surname.

Some common surnames and their origins

Wheeler – another word for a wheelwright

Walker – someone who pounded wool with their feet, part of the wool making process.

Stringfellow – made the string for bows

Wainwright – someone who made carts

Arkwright – someone who made chests (arks)

Dempster – derived from deemester, an old English word for a judge

Kitchener – worked in the kitchens

Davies and Davis – both derived from Davy’s (David’s) son

Shaw – another word for a wood.

Townsend – someone who lived on the edge of town

Cruikshank – someone with crooked legs

Are you a bearer of one of these names? Please tell us in the comments below! Or do you have a very unusual surname origin?

Are keen to find out more about the history, meaning and origin of surnames? If so, we have a variety of blog articles for you here. Plus, you might like a copy of your own surname’s history. Click here to find out more and search for your own name. Thanks again to Historic UK for providing this useful article.