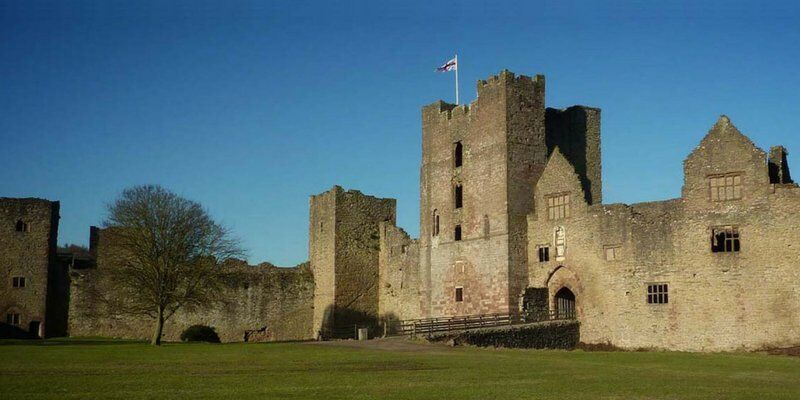 It is no surprise that the majority of Ludlow Castle’s visitors rate their experience as ‘excellent’. Set within the pretty Shropshire town of Ludlow, which developed as a result of the castle’s construction and commanding magnificent views, the castle has been described as ‘history at its best’.

A dominant presence overlooking the river Teme, this ruined medieval fortress was one of the first stone castles to be built in England, in approximately 1085. It was was built by Walter De Lacy following the Norman Conquest and now covers around 5 acres.

Ownership of the castle changed over subsequent centuries, and it played a pivotal role in some of the most turbulent years of English history. For example, one of its 14th century owners, Roger Mortimer, helped his mistress, Queen Isabella, to overthrow her husband, King Edward II.

In 1473, the Prince of Wales and his brother were held at Ludlow Castle prior to their mysterious death in the Tower of London. (This is a contentious point amongst history purists – you may well see comments on facebook and twitter telling you that this is not accurate).

In 1502, Prince Arthur, heir to the throne and son of Henry VII, died at Ludlow Castle. Messengers, lawyers and clerks bustled inside the walls of Ludlow Castle during the late 15th century. This is when it was the headquarters of the Council for the Marches of Wales. It underwent massive refurbishment and was at this time, in the decoration of an Elizabethan stately home.

When the Council ceased to exist, the castle itself fell into neglect, having never fully recovered from the civil war years. Eventually, the property was on lease by the Crown to Herbert, the Earl of Powis. He was the one to undertake extensive landscaping of the ruins.

In 1811, his brother-in-law Edward Clive purchased Ludlow Castle outright and constructed a mansion in its grounds, leaving the original ruins virtually untouched. In its picturesque state, it became a popular destination for artists. It was a popular choice for visitors to the area.

In 1900, it underwent extensive clearance of vegetation. Over the course of the following century, it benefited from much-needed repairs by government bodies and the Powis Estate. The Georgians and Victorians used the Castle for their leisure pursuits. At this time they would include archery, bowling, fox hunting, agricultural shows, plays and festivals. Therefore, its tumultuous history long buried.

In 2007 Ludlow Castle underwent an extensive repair programme, undertaken by skilled craftsmen. It has extended its visitor facilities to include a café and shop. In addition, it can also offer accommodation as well as wedding packages.

There is currently building and conservation work ongoing to improve the visitor entrance. Indeed, for the first time Castle House Gardens are open to the public throughout the year. The gardens are in keeping with its surroundings and boast amazing views of the Shropshire countryside.

Every year, there is a selection of events on offer for the visitor. From transport and food festivals to living history events, jousting and Medieval Fairs. Ludlow Castle really is a must-see for visitors to Shropshire.

Sonja Belchere the Custodian has stated that she is excited to welcome Hall of Names at a time when there is a big change at the Castle. She is pleased and amazed at the interest shown by their visitors in coat of arms and surname history scrolls.

Have you visited Ludlow Castle? What was your favourite bit? Share your experience here!  Find out more about the coat of arms and surname history for your name by clicking here.